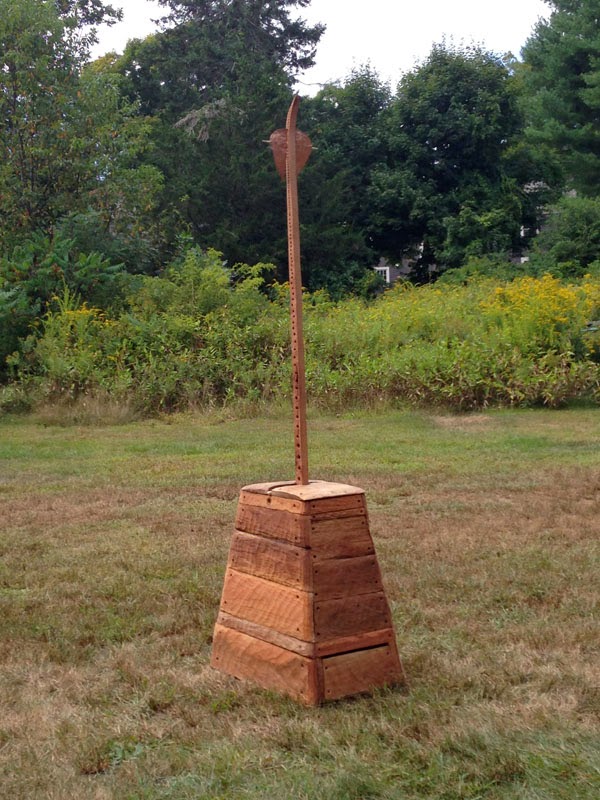 Tick Tock Trebuchet is the prototype for the 'Ballad of the Paddled Ore' but instead of having a piano at the base it has two wire strings that sound as the pendulum strokes them. The beaten copper wings are blown by the wind or a person to produce the movement which activates the sound.
Link to the video:  https://vimeo.com/107493378 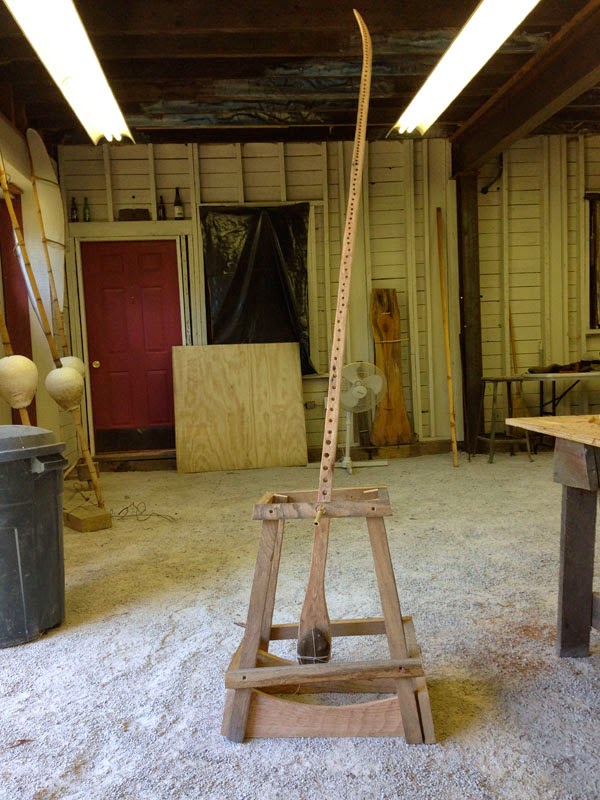 Two stones screwed to the base for weighting the pendulum 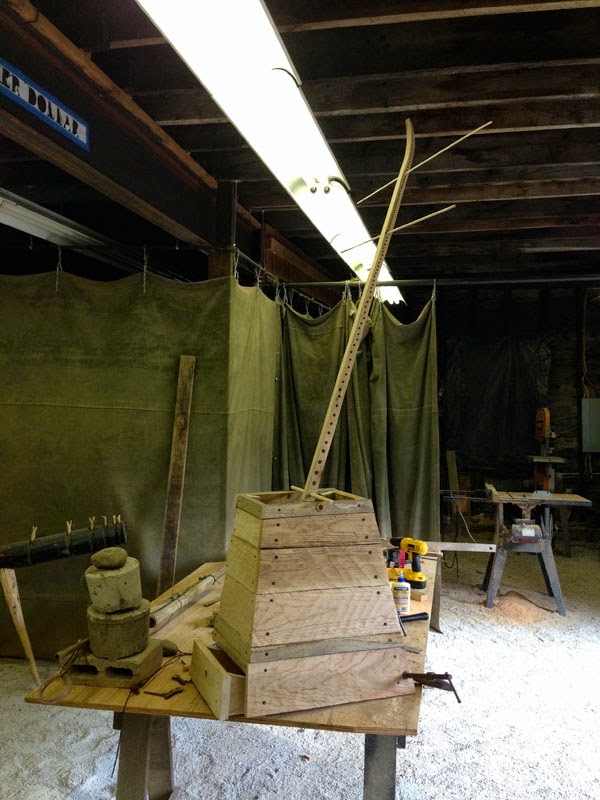 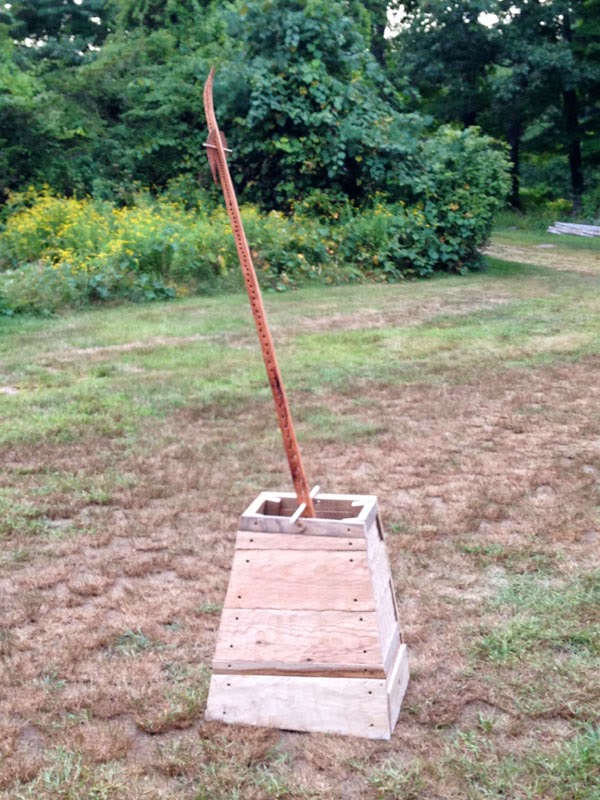 Checking the movement of the pendulum 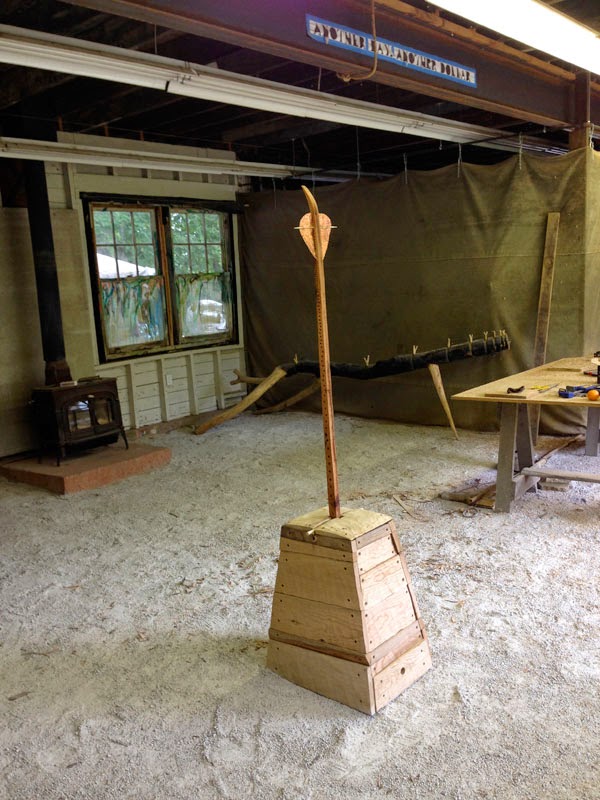 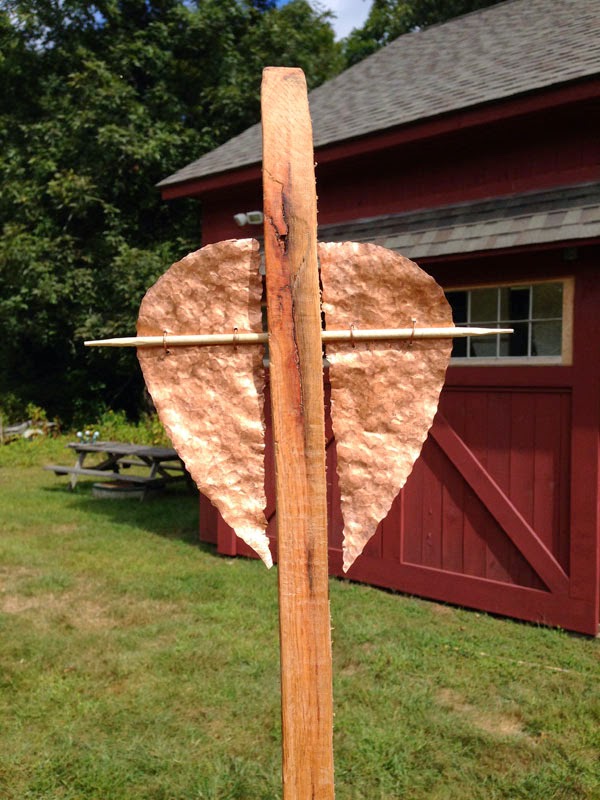 Posted by Michael Fairfax at Tuesday, September 30, 2014 No comments: 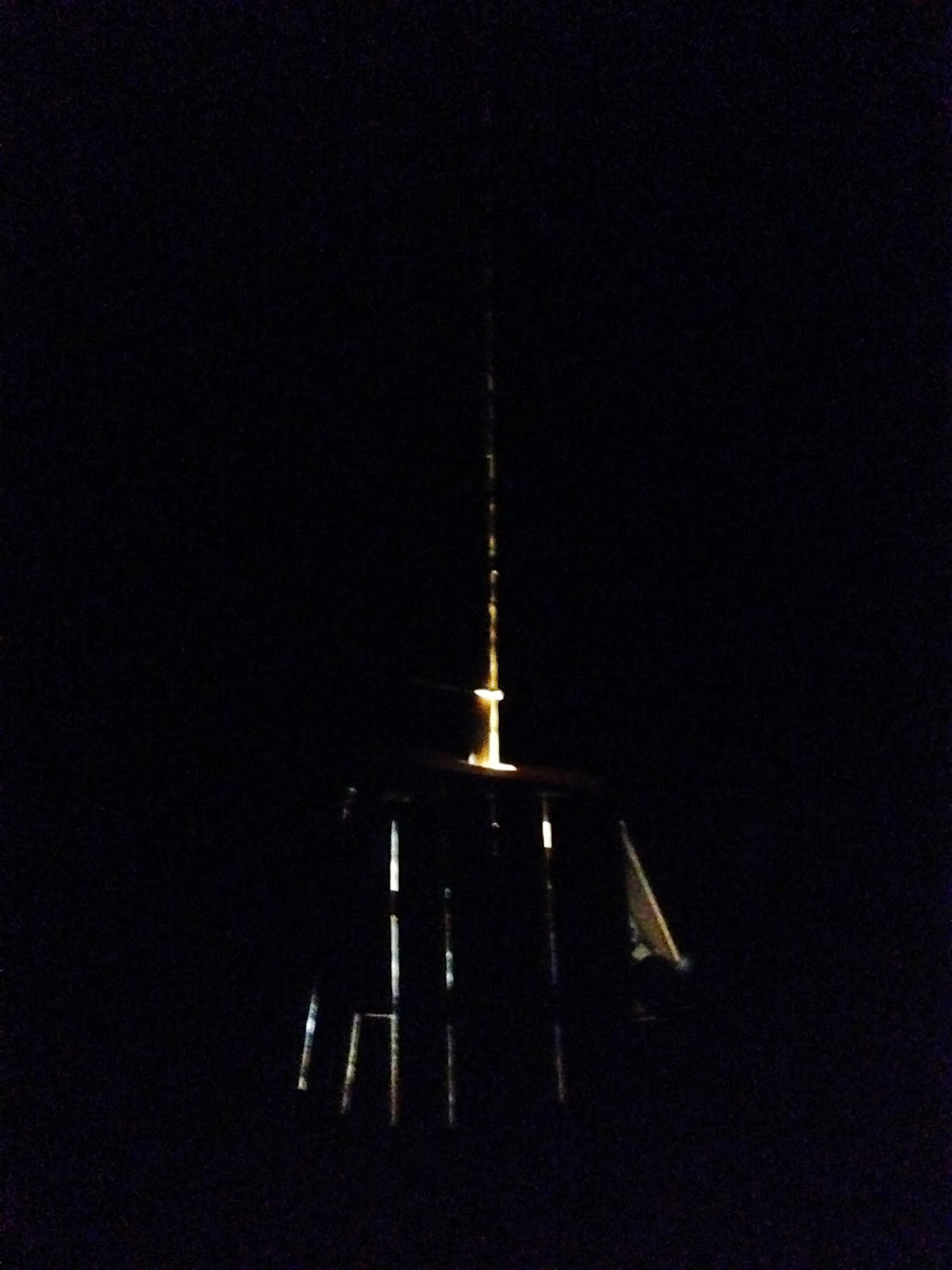 Posted by Michael Fairfax at Monday, September 29, 2014 No comments:

Ballad of the Paddled Ore 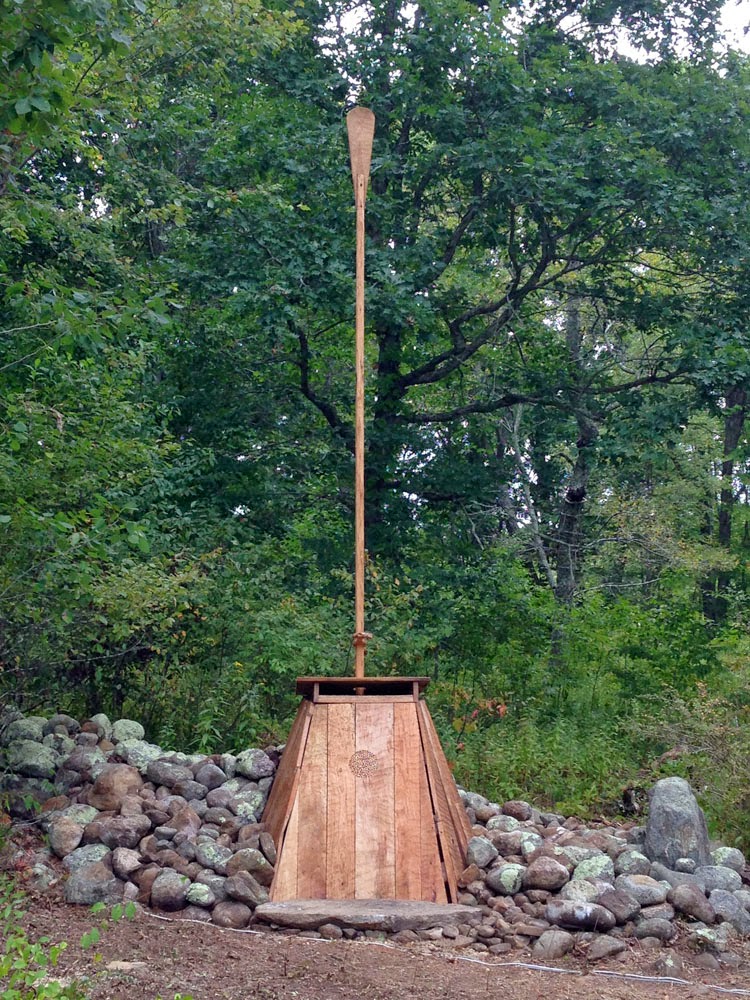 Now back in Britain after a fantastic time at I-Park in Connecticut.  So the main commission is this, a pendulum, a holding unit, the strings and soundboard of a piano, all thrown together with massive help from the brothers Steve and Bill plus Gary who dismantled and rebuilt the stone wall!  The pendulum is weighted so it gentle moves in the wind thus enabling the plumb bobs and fishing weights to move back and forth against the the strings of the piano this creates sound.  The sculpture was part of the 'Illuminations' show at I-Park so it was lit with the help and expertise of Scott and Tom. at night the sculpture took on a whole new persona and became quite a menacing presence.  Videos will follow on my vimeo account at a later date. 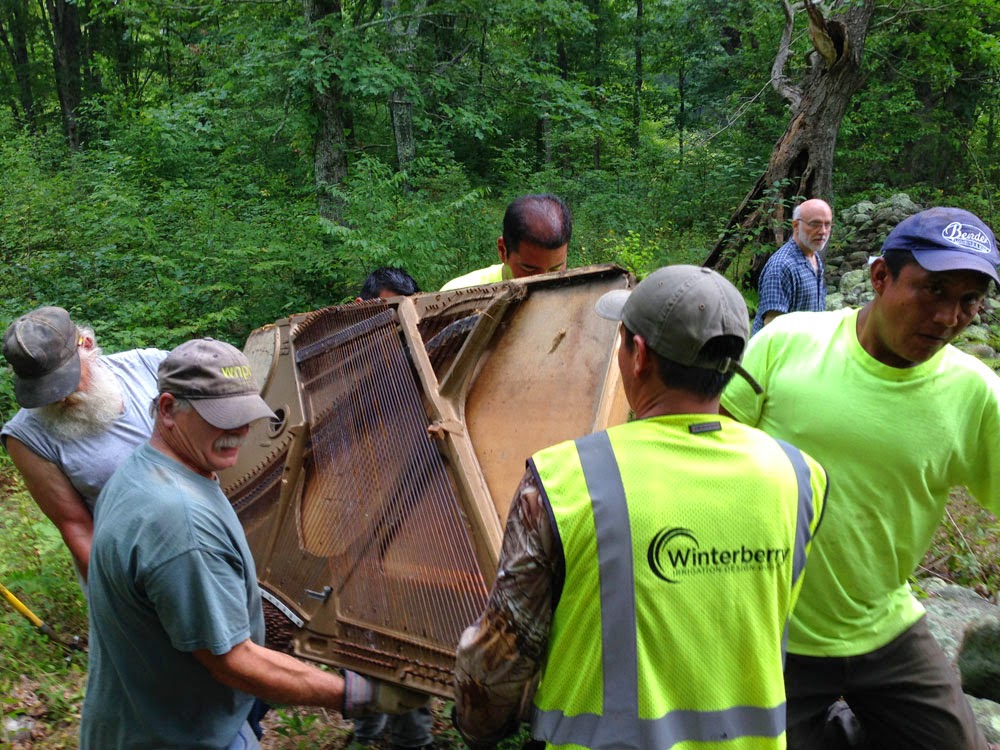 carrying the piano to site 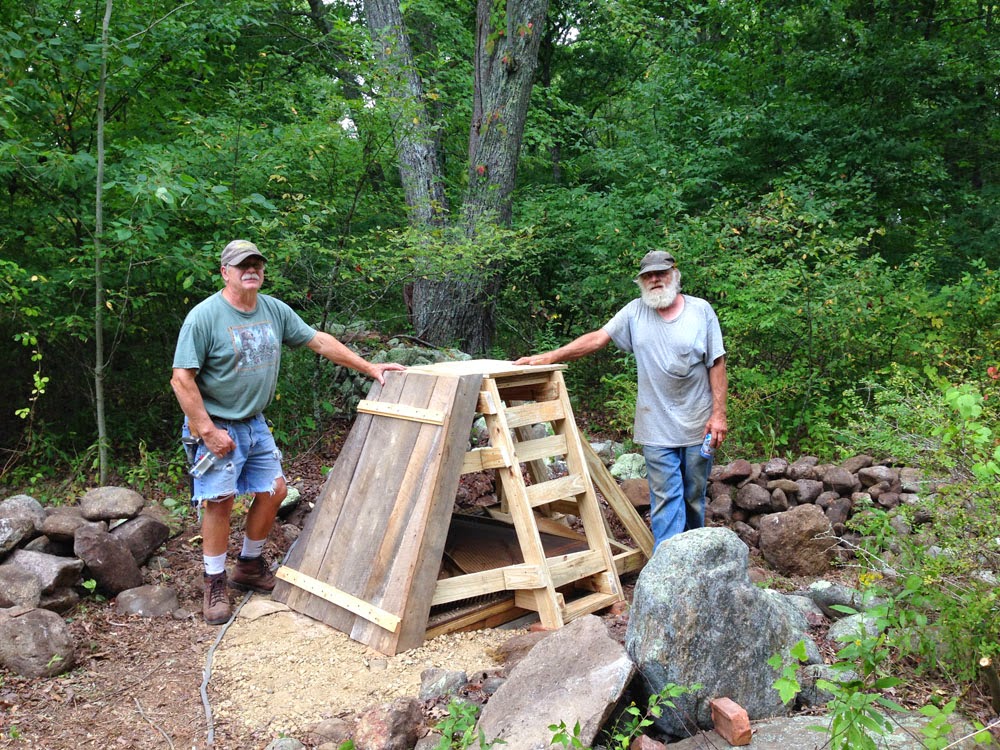 Steve and Bill making the base 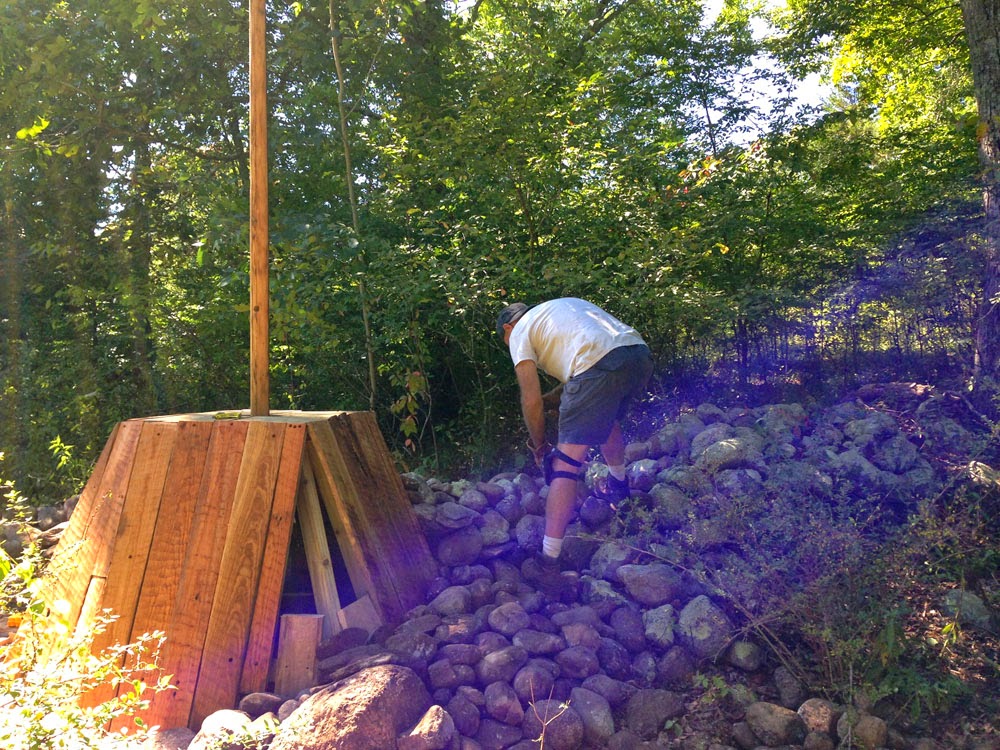 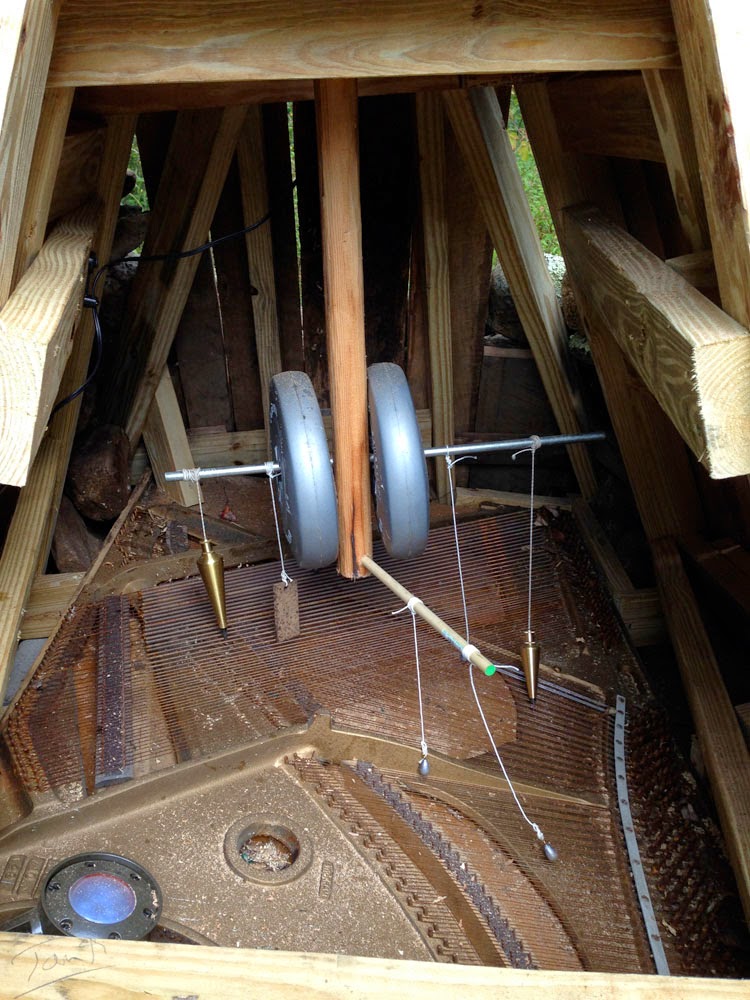 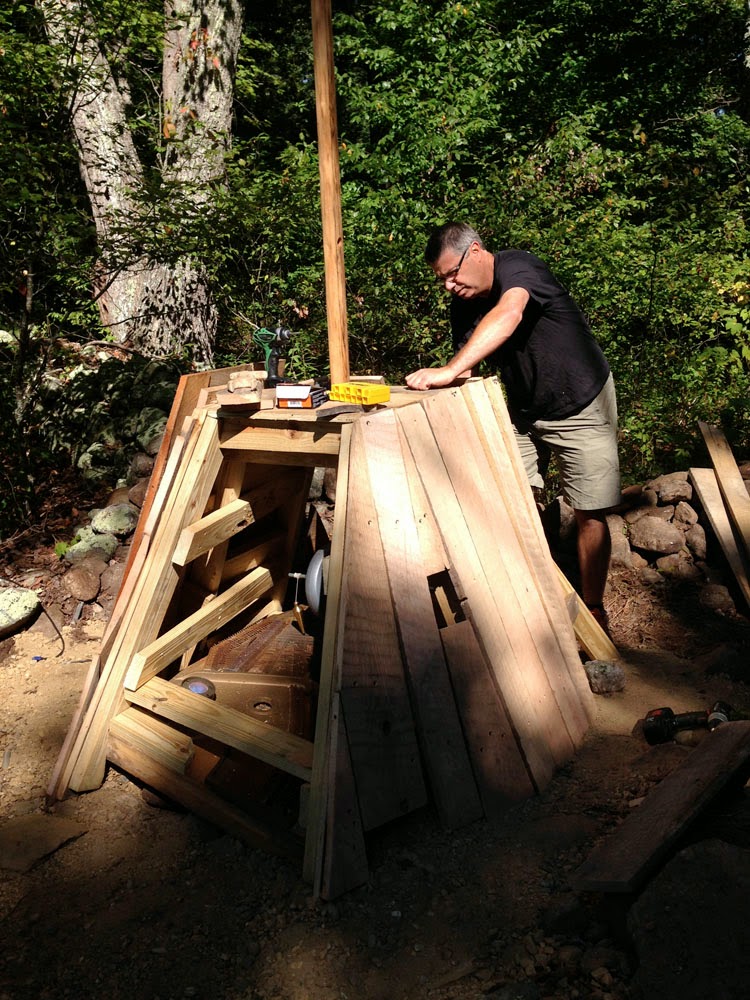 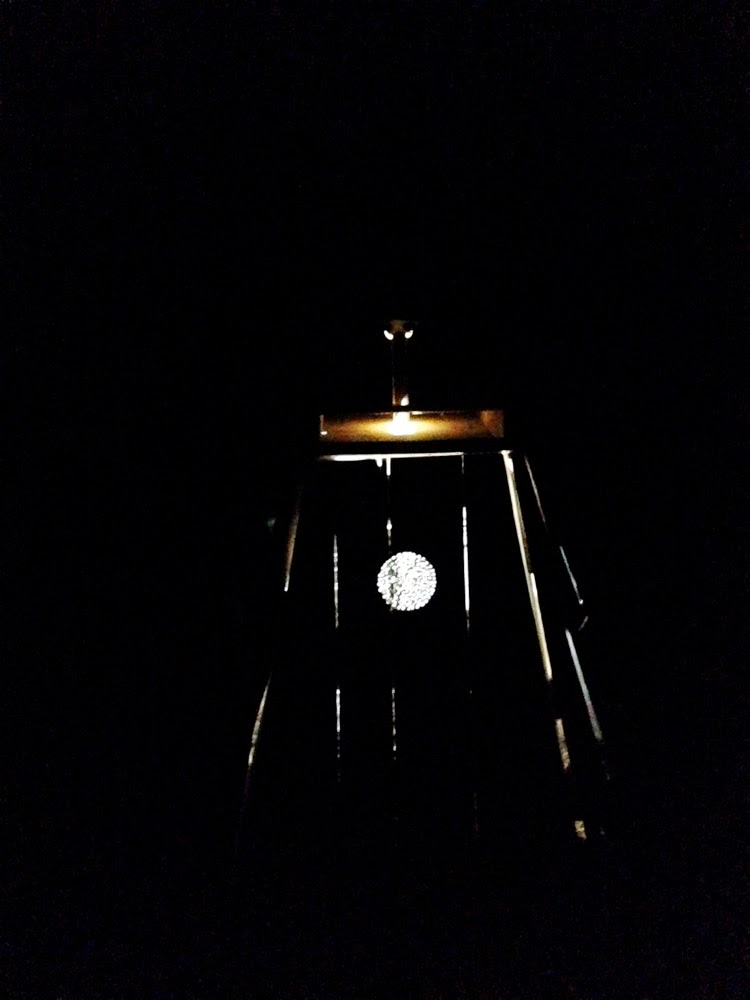 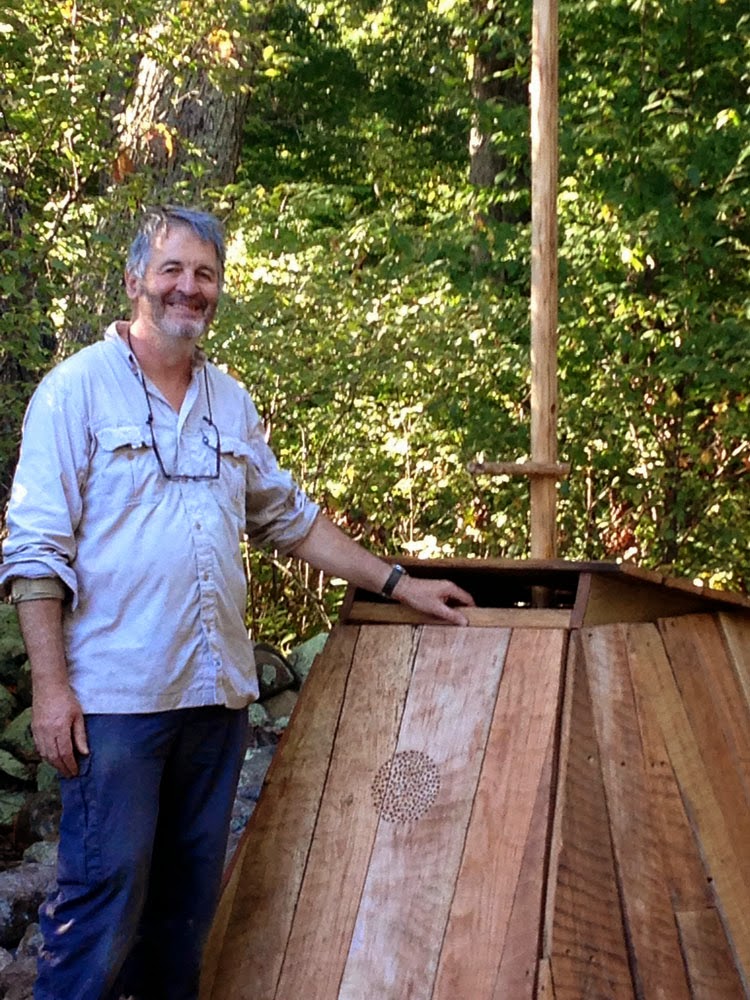 Posted by Michael Fairfax at Monday, September 22, 2014 No comments:


Well here I am again for the third year running at I-Park in Connecticut USA. I met up with Ralph Crispino who runs  I-Park in New York and we travelled up together. My task this time to to create a private commission for Ralph and to make something for an auction event that they are running to raise funds.
Ralph and I talked at length to decide what I might make and where in the grounds, eventually we came up with a great site as part of a stone wall that traverses the park.  The concept was borne from my first visit when I fell in love with the Piano Field and saw an open piano having its strings struck by falling acorns and creating sound.
So for this piece I wanted to create a pendulum with a number of attachments that move when the wind blows and the attachments/hitters strike the strings on the bed of a piano.  I found the perfect piano guts with an array of scary spiders, that every time I struck a note came out of the soundboard to see who was disturbing their peace!  Bill and Steve took the heavy piano (cast iron) near to the site. Ralph and I helped them move it to site, meantime Gary had been clearing stones from the wall so we can incorporate it into the walls line. The piano is now sitting waiting the construction of the base that  will act as a framework to hold the pendulum in position, that framework will then be covered in stones so only the pendulum is visible and the general visual aesthetic is one of a cairn, all be it a piano cairn.  He lies the buried piano who on windy days, sounds are carried of its distant memory.
Whilst this has been going on and to help understand the concept I have made another piece which will be auctioned on the Saturday. This one I will make the strung part myself and it will be struck by a lone hitter at the base of the pendulum, this is made from oak, and during the making of it I have had to drive (first time in USA and an automatic) to Shagbark the local hardware, lumber, toolshop, which has been fun.
Posted by Michael Fairfax at Sunday, September 07, 2014 No comments: