Workshops in Saltfleetby and the Pillbox 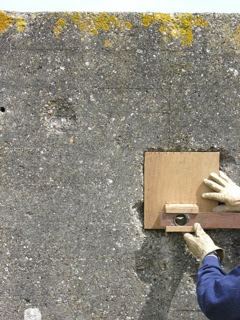 Hurrah. The pillbox on the edge of the saltmarsh. East Lincolnshire coast what a contrast to the west of england, blimey this is flat and salty. Roger Briggs of Natural England is our host, bringing his immense charm and hordes of primary school children to the workshops that Chrys Allen and myself are running. Chrys is a star of organisation and monitor of everything particularly gates! she leads the workshops with the children getting them to investigate the reserve. ( I am sure she will explain in detail what she is up to) I have the pill box which I have converted into a camera obscura with three apertures (nesting swallows meant we couldn't use the other side). Roger and I fitted the plywood, metal and lens elements.
We cleaned out the pillbox to hygiene that would befit...........well wild animals and artists. Once the frames inside were in place and the tracing paper attached........magic, oh beauty, the images appeared east, south and west views, this was a time for Roger, Chrys and myself to sit and contemplate, the more we sat the more we saw, the more time stood still, the images slightly moving, upside down, obstensibly green, blue skies and cumulus clouds. We went home at 8.00 tired but things were looking terrific.
For the past two days we have had the schools in, Chrys has done her bit. Roger has explained the nature reserve and I have sat in a dark five foot high by six foot square slightly damp concrete box awaiting my victims.............ooooops I mean the children, they come in, slighty nervously because of the dark, but then with gasps of excitement as they see the images and then the bafflement of the upsidedown nature of it all. Once I have six inside and a member of staff I tell then about the use of the pillbox and then explain the working of a camera obscura, its links to the working of the eye, the way artists have use camera obscuras and optics in the past.
After this they are given felt tip pens and they can draw on the tracing paper, trace the outside image, this they love and when they finish I cut out the paper and set up for the next group until at the end of the day all pupils have been in and done a drawing, these drawings are then given to the teachers to take back to their schools.
The children really have been brilliant and embraced the dark environment, the spiders and the wet sand inside, so far not one has 'freaked'. Again this can be said of the staff who have all come through a very narrow and low entrance on hands and knees without a fuss a real testement to the staff of all the schools who have so far been involved.
Two more schools to come on thursday and friday and then a public viewing on sunday from 1 - 4 pm

Roger has sorted all materials we made need, stayed on to work late, drank tea and been a great host for the project.

Chrys and I are staying nearby in Theddlethorpe (great name), with walks on the salty beach that go for miles and on the walk to the sea we pass razor shells, starfish, sea anenomes, oyster shell and lots of other shells, sand and sand and sand and eventually the sea. Fantastic, the crispness of the salty sand as ones foot treads on it is weird but wonderful.
I haven't mentioned the Natterjack toads, the Sandlings, the Oystercatchers, the Reed Warblers and a whole host of amazing wildlife, but I may later!
see http://ignitebreathoffreshair.blogspot.com/ for info about the project and future blogs
Posted by Michael Fairfax at Wednesday, May 25, 2011 1 comment: 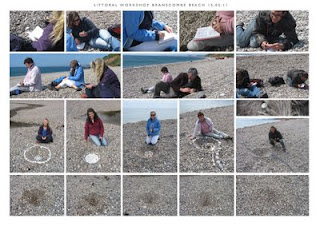 We came to sunny branscombe for the day
roselle leading us to the silent walk beach
exercises, words on paper and it flowed
it was such a blooming pleasure to be lying on the beach
thinking words.
then lunch
umm
homity pie and stolen chips
a bowl in pebbles
filled with more pebbles, controlled pebbles, spilling pebbles, coloured pebbles,
thought pebbles.
sand
sunburn
the revealing
stories.
home again
jiggity jig.
the sea air possessed me
Posted by Michael Fairfax at Monday, May 16, 2011 2 comments: 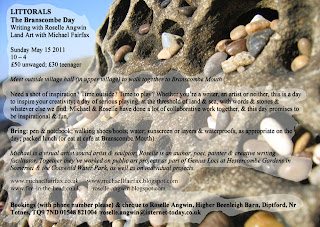 Poet Roselle Angwin and myself are holding a Littoral workshop on the beach at Branscombe on the Sunday 15th May. Details are on the attached flyer. Please book asap. You will spend the day creating poetry/words relating to site and then interpret your words and the site in a series of sculptural interventions using the materials at hand. The day brings into focus the minutiae of the site with the age of the cliffs and the jurassic coast, a personal journey and interpretation.
Bring a packed lunch or shop at the nearby cafe.
Posted by Michael Fairfax at Thursday, May 05, 2011 No comments: 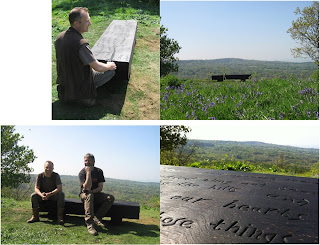 So on top of a motte and bailey castle on the blackdown hills my latest piece of work sits waiting for you to sit upon the charred oak surface. The words are by Gavin Saunders the project manager for the Neroche Project and a testament to the work that has been achieved here over the past five years. Carved from local blackdown hills oak during the winter it is now ready for the rambler to sit and take in the wonderful views over the blackdowns and beyond
Posted by Michael Fairfax at Monday, May 02, 2011 No comments: