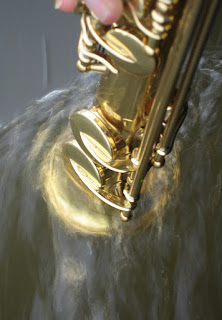 A trip on the Bridgwater Taunton canal with Tim Hill and Jules Bushell recording sounds, including hydraphone in the water whilst Tim blew his Soprafina, in the water. I haven't heard the results yet but can hardly wait.......good day!
Posted by Michael Fairfax at Tuesday, December 20, 2011 No comments:

So amongst the gales, the rain, the onset of winter, I have been seeking solace in my weatherbeaten studio at Hurstone. I have been making more instruments to play, to create a noise, as one is finished so it informs another..Here we have the first attempt at an acoustic chamber, a trip into the wood, a large fallen oak and chainsaw in hand the bottom part is cut and hollowed out, plunge cutting a cone to remove and finishing off with an arbourtech. 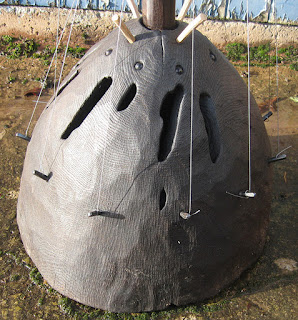 A large Hazel pole is cut to hold the piano tuning keys and then the wires, a spiral of wires of differing lengths to enable different sounds.

I also thought that it would be rather good to have a circle of glass marbles at the top of the chamber so that a light source could be put inside and the marbles will glow with the light when performing..Yes the visual element is important as well, the theatrical element onstage. These are sculptures too, the aesthetic that I bring to all I make both visually and aurally. So to the playing, so far I haven't amplified or used any means of tone generator, this little beast has plenty of sounds, bowing it brings a range, plucking and striking too. The first gig I can bring it out will be the 21st January at the Congregational Church in Wiveliscombe..so there is one for the diary already. I can't wait to get this beast into the performing arena.
Posted by Michael Fairfax at Thursday, December 15, 2011 No comments: 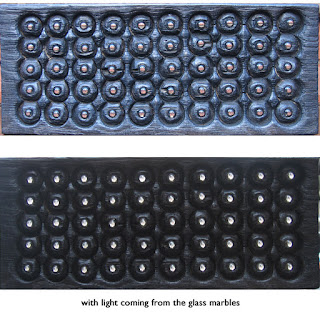 To celebrate John Moat's occupancy of Crenham Mill I have made a small sculpture for him and Anni.
So a celebration to the mill with love
Posted by Michael Fairfax at Friday, December 09, 2011 No comments: 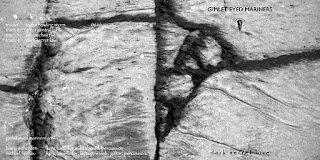 The Gimlet -Eyed Mariner's CD is now available on the Slightly off Kilter label details here on how to get your copies!!!!
http://slightlyoffkilterlabel.blogspot.com/2011/11/sok040-gimlet-eyed-mariners-dark-secret.html
go in your hundreds and I'll wear glitter!.
Posted by Michael Fairfax at Wednesday, December 07, 2011 No comments:

It is december the first! the first day of the advent doors is alive. go to http://www.youtube.com/watch?v=3yY9aVBazV0
and watch
Posted by Michael Fairfax at Thursday, December 01, 2011 No comments: